DAY 1:The Troop arrived at Fulton campsite. We had to hike to our site in the pouring rain but that did not dampen the boys' spirits. They picked out their tents and began unpacking and started to thoroughly enjoy the campsite. We had a break in the weather long enough to be able to take the swim test without any rain which is always a plus.

DAY 2:Today the boys are off to their merit badge sessions and are having a good time - especially with there not being any rain so far.

DAY 3:Yesterday (Monday) the boys began their merit badge classes, a lot of the boys were really excited and couldn't wait. The younger boys that just joined the troop stayed behind with Mr. Cummings and began working on advancement. Let it be known that all of them received their Tote'n Chit card and now can carry their pocket knife with them. By the end of the day several of the boys went to the soccer field to play against another troop. Eventually we split the entire group into two teams so the boys ended up playing against one another. Overall the boys had a lot of fun including Mark Z. Who was schooling kids left and right (including myself). Jonathan W. our fearless leader, attempted to head the ball however misjudge and hit the ball with his face. No worries though he immediately began laughing and continued playing on. Luckily there were no injuries, including Jonathan's face. The MVP of the game went to Cameron S. for delivering the tie breaking goal in the shoot out. Afterwards the boys attended the camp fire and were quite amused with what the camp had to offer in terms of skits and songs. Overall the boys are enjoying life and I doubt they are missing home.

DAY 4 & 5:The past two days have been on again off again rain, including a storm so vicious I have never seen the likes of one up here in my tenure. (The wrath of the Hellstern curse must have passed on to young Kyle.) But like I said before the boys are still having a great time. To mention a few things the young ones (Thomas, Aidan, Stan, "ED", Mark, Connor, and Jack) went on their 5 mile hike today. And from the way it sounded, it sounded like they had quite the adventure, especially trying to traverse the platform bridges that had been flooded from the previous rainfalls. According to Mr. Cummings the bridges were swamped and your feet ended up soaked. However he said the boys did not complain and continued on to enjoy the wonderful views of Massawepie Lake. Tomorrow the young scouts will be launching/exploding their rockets depending on how well they built them. I'm sure they will tell you all about it. As for the older boys Jonathan is quite the extraordinary leader. I have yet to give him any comments on improving his leadership, he is just a natural leader, and has led this group well. And finally the boys have been working diligently on their campfire skit for tomorrow's camp wide campfire. Led by Konrad they will be doing a rendition of "If I were not a Boyscout" superhero edition. To just tell you a glimpse of what will be included in it, Mark will be playing Dr. Bruce Banner, when he gets angry he will be turning into the Hulk played by Mr. Johnson. 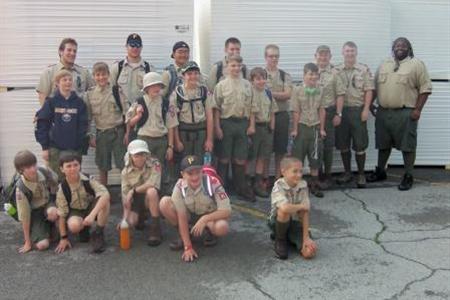