Origin of the World Scouting Symbol

In Scouting's early years, critics accused Baden-Powell of trying to turn boys into soldiers, holding up as evidence the Scout symbol, which they called "a spear-head, the emblem of battle and bloodshed". The Founder quickly replied, The crest is the "Fleur-de-Lis", a lily, the emblem of peace and purity.

​In truth, he had chosen as Scouting's emblem the sign for the North Point, universally shown on maps, charts and compass cards, because "it points in the right direction (and upwards), turning neither to the right nor left, since these lead backward again..." Lady Baden-Powell added later, "It shows the true way to go."

Baden-Powell explained the origins of this sign. In the Middle Ages, mariner Flavio Gioja designed it to make the seaman's compass more reliable. In Italian, North was "Tramontana". Gioja used a capital "T" to mark it, and in deference to King Charles of Naples, whose crest was the Fleur-de-Lis, combined the letter with that emblem.

In the World Scout emblem, the Fleur-de-Lis is surrounded by a circle of rope tied with a reef knot to symbolize the strength and unity of the world brotherhood of Scouting: "Even as one cannot undo a reef knot, no matter how hard one pulls on it, so as it expands, the movement remains united."

The three tips of the Fleur-de-Lis represent the three main parts of the Scout promise: duty to God, obedience to the Scout Law, and service to others. The two five-point stars stand for truth and knowledge, and the 10 points on the stars remind us of the 10 points of the Scout law. The ring holding the emblem together represents the bond of brotherhood and one-ness ties at the bottom by a square knot, a symbol of service.

The symbol is white on a royal purple background, colors Baden-Powell chose because, in heraldry, white stands for purity and purple for leadership and helping others.

​Since Scouting began, over 200 million Scouts have worn the Scout symbol, making it one of the more highly recognized emblems in the world. Today, over 150 World Scouting countries and territories, more than 16 million members. 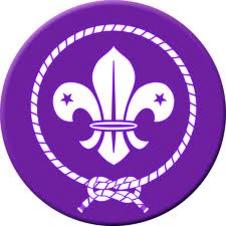